New Hotels, Shows, Restaurants, and Entertainment In Las Vegas for 2020/2021

New Hotels, Shows, Restaurants, and Entertainment In Las Vegas for 2020/2021 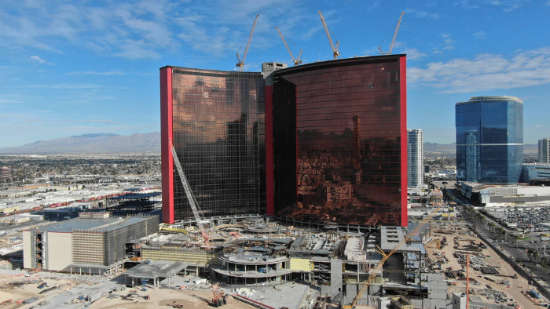 Every year, there are a whole range of new and exciting things to do and see in Las Vegas – and this year things are no different! With so many different happenings to talk about, where does one begin?

Virgin (as i the company that’s best known for Virgin Atlantic Airways, and for having a hyperloop test track right outside of Vegas) thinks that they can breathe fresh life into the area, so they’re completely revamping the Hard Rock Hotel and Casino.

It should be interesting to see how much $150 million changes the hotel. If all goes as planned it should be open right when fall begins.

This (relatively speaking) oldie but goodie opened in 1996… and just like the Hardrock hotel/casino, it’s in the process of a major upgrade (at approximately $140 million). Stratosphere, meet ‘The Strat’.

I’ve always liked this casino as it offers a lot of things to do and is host to the famous ‘Top of the World’ restaurant which is at the top of the tower, and slowly rotates so that you can see the entire city.

It’s truly beautiful, and it (just like everything else in the casino) is getting a big facelift – be sure to check it out!

Downtown Las Vegas is in the middle of a comeback that is going on 20 years long. A long time favorite of locals, guests from out of town may once again find some renewed interest in Fremont street and downtown since a brand new, 777 room hotel called ‘Circa’ will be opening up sometime in 2020. It’s the 1st time in almost 40 years that a new casino has been built in Downtown Las Vegas, hopefully, it’ll live up to its high expectations!

2010 was the last year that a megaresort opened up in Las Vegas (The Cosmopolitan which cost $3.9 billion and has almost 3000 rooms). And by the end of 2020 there was supposed to have been another brand new $4.3 billion, 3,400 room megaresort on the strip. However, due to some setbacks, you’re going to now have to wait until the summer of 2021 to check it out! Resorts World (when it finally opens) will be the most expensive resort ever built in Las Vegas and unlike the Cosmopolitan, it will have a definitive theme (Asian). Being as big as it is, it’ll include some things that you’ll be hard-pressed to find on the strip, such as a movie theatre and a panda exhibit.

Although this restaurant didn’t open in 202 it did however decide to change its menu ‘a bit’ for 2020. It appears as though Truth & Tonic is now the very first all-vegan/plant-based restaurant on the Las Vegas Strip. Whether you’re looking for a hearty vegan meal or a power vegan shake/cocktail, this is the place.

Located at the Palazzo is the Moon Palace, a new restaurant from chef David Chang. For the strip, this is a relatively inexpensive place to pick up some unique looking fries (‘chips’ if you’re from England) and griddled beef (or impossible beef) patties with caramelized onions. Yum! A combo of the 2 can be had for as little as $10… not too shabby. It’s important to note, however, that when you see the prices on the beer you might run for the hills – $10 for a 16oz bud light… yikes; not everything is a bargain on the moon.

The Flamingo casino was the first casino that was truly owned and operated by the mafia, is returning to its roots (in name only of course). Bugsy & Meyer (the names of 2 infamous Las Vegas gangsters) is the name of this new steak house which will serve dry aged meat/steaks ‘vintage style’. The look and style of this place are sure to transport you back to the good old days!

Speaking of steak houses, if you’re in the mood to check out a new steakhouse in 2020, but find yourself on Fremont street instead of the Strip, then you might want to check out the Saltgrass steakhouse. You can find it in the Golden Nugget Hotel/casino (you know, the one with the awesome pool). In addition to the steak, you’ll find things such as BBQ baby back ribs and an array of seafood.

New at the Encore (Wynn) this year is a contemporary Mexican restaurant. It focuses on seasonal dishes, seafood, and regional dishes inspired from the 40’s and 50’s.

Hot Pot is finally coming to the Strip and it’s coming with style! Their website perfectly sums up what you can expect at The XPot, “With beautiful HD 360 projections, thematic soundscapes, and interactive light shows right on your dinner plate – The XPot is The Venetian’s first luxury Asian Fusion restaurant that takes the thousand-year-old hotpot tradition and turns it into a high-end, high-tech experience for all generations.” It may be tough to beat the outstanding Hot Pot options in Chinatown, however, it is nice to see the Strip finally get in on the HotPot scene.

A Taiwanese dumpling house will be arriving on the strip this summer at the Aria and this is great news for fans of Chinese food! It’ll probably be pricy but if you’re really in the mood for dumplings, you’re on the strip, and want a real nice Asian decor then this is the place for you. It should be easy to find a seat here as the place is about 518 sq. meters.

This restaurant serves Vietnamese food in a modern-day setting. The first Slanted Door opened in San Francisco. Originally, they were supposed to open up their Las Vegas hot spot on the strip (at the Caesars Forum shops) way back in 2018… but they missed their opening date and are now finally (here in 2020) opening their $3 million Vietnamese venue on the strip.

Better late than never. Karaoke, a longtime favorite way to spend your time with friends, family, and business associates in Asia, is finally making its way to the Las Vegas Strip! You can find it in the Grand Canal Shops (in the Venetian) and in addition to having both standard and VIP rooms, it has a full bar and some e-gaming options!

This is where all of the old and glamorous Las Vegas Neon signs go to die. The signs here are classic and beautiful, and there’s always someone working there who fills you in on the history of the signs that you are interested in. Yes, I know the Neon Museum isn’t new for 2020, but what’s new is that they’re finally expanding the place (which is a good thing because in my opinion, it was a bit too small, making it a bad overall value). The expansion will add almost 3,000 square meters of new signs and exhibitions – pretty impressive! Additionally, in 2020 there will be a rare exhibit there by the famous Hollywood director Tim Burton (known for doing Sweeney Todd & Beetlejuice). Wow! This place just went from a ‘don’t see’, to a ‘must-see’!

Did you see the movie Titanic and then wish that they could’ve seen that beautiful boat with their very own eyes? Well, now is your chance! Truth be told, this exhibit isn’t new in 2020, but what is new about it is the addition of 108 new artifacts from the actual ship (which brings the total amount of artifacts to just over 400)! This exhibition (even prior to its 2020 renovation) has had great reviews so it’s definitely worth a look!

If music is your thing then you might want to check out this big list of names. You may see some of your favorite musicians on here, and if you do be sure to come and see them in 2020! Some of the residencies coming to Las Vegas in 2020 include: Lady Gaga, George Strait, Barry Manilow, Bruno Mars, Mariah Carey, Aerosmith, Foreigner, Robbie Williams, Van Morrison, Reba Brooks & Dunn, Billy Idol, Paula Abdul, Sting, Kelly Clarkson, Christina Aguilera, Cher, Shania Twain, Lionel Richie, Boyz II Men, Sarah McLachlan, David Lee Roth, Chicago, Zac Brown, Keith Urban, Rod Stewart, Santana, Bryan Adams, Gwen Stefani, The Doobie Brothers, and Diana Ross.

Not unlike it’s distant cousin Area 51, this place is indeed mysterious. If you’re looking for something unique, that doesn’t quite fit into any of the typical categories, then try Area15. According to their website they are an, “experimental retail and entertainment complex offering live events, immersive activations, art installations, and much more”. If you’re curiosity has been peaked, I recommend you check out their website for more info.

This mega-big mega-cool-looking American football stadium is expected to open up this summer (for the beginning of the 2020 NFL season). Expect this $1.8 billion dollar stadium to be impressive. This will be the new home of the NFL Raiders and in addition to football, it is expected to host between 20 – 25 non-football sporting events every year.

This is the huge sphere that everyone is talking about. This place will be a venue that can hold up to 20,000 people and will have endless amounts of high-tech features. Unfortunately, though, you’ll have to wait until 2021 to see it.

Looking to get out of Vegas and see some nature? Join us on a trip to Antelope Canyon!

5 Amazing Facts about the Grand Canyon (Will #1 Gross You Out?!)

What Is The Cheapest Way To Visit The Hoover Dam?

All Your Questions Answered about Visiting Seven Magic Mountains

Can I Go To Horseshoe Bend Without a Tour? 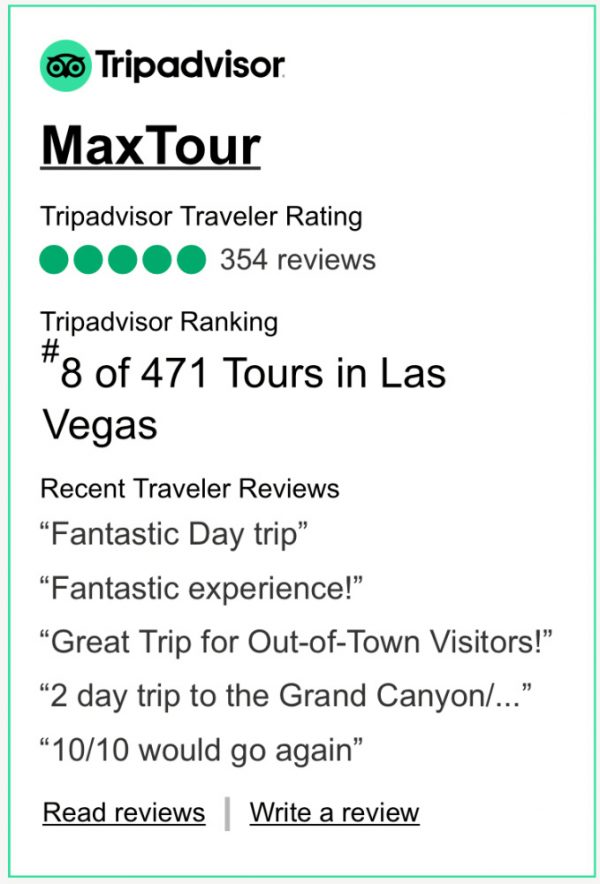 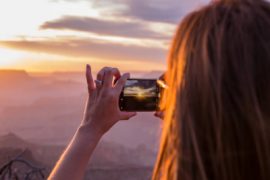 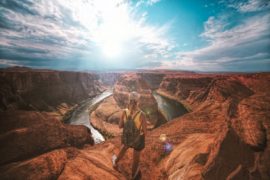 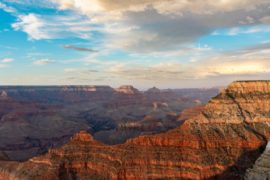 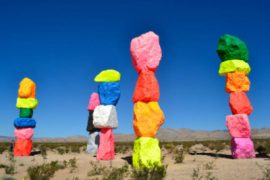 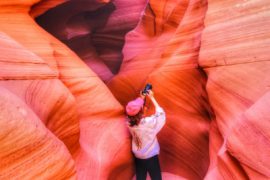 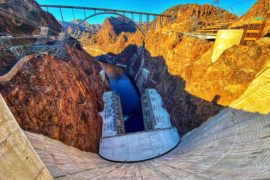