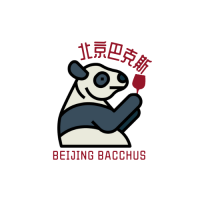 Is Horseshoe Bend Part of the Grand Canyon? 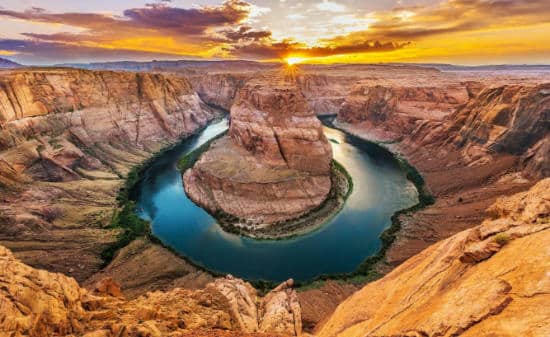 As observed from above, The Grand Canyon and Horseshoe Bend share much the same story; thousands of feet of solid, desert rock-cut and shaped by the mighty Colorado River over millions of years.

The striking similarity and same general location of the two scenic areas force many visitors to question, is Horseshoe Bend part of the Grand Canyon?

Short Answer: Officially, Horseshoe Bend is not part of the Grand Canyon. Instead, it is in the Glen Canyon National Recreation Area

Educated Answer: Defining the boundaries of the Grand Canyon and Glen Canyon is tricky business!

The Beginning and the End of the Grand Canyon

The Grand Canyon is a 277 mile-long stretch of the Colorado River that is surrounded by up to 18-mile wide canyons.

But wait! As it is officially mapped, the Grand Canyon begins at Lee’s Ferry (Just Downstream from Horseshoe Bend) and Pearce Ferry (just upstream of Lake Mead and Hoover Dam). This is because when the Grand Canyon was first being mapped, we didn’t have the Dams to serve as landmarks. Instead, the boundaries of separate Canyons were defined by where you could cross them.

The Horseshoe Bend area is sometimes referred to as the “East Rim” of the Grand Canyon and given the striking similarities between the two landmarks, and that many people see these two landmarks in a single tour or trip, it’s easy to see why.

Officially, there is only the South Rim, North Rim (Grand Canyon National Park), and West Rim (run by the Hualapai tribe).

Related Reading: 5 Amazing Facts about the Grand Canyon (Will #1 Gross You Out?!)

It’s important for travelers to know this because many companies and bloggers like to advertise the East Rim of the Grand Canyon to give the illusion of being unique, provide a service nobody else has, or even depict the tour locations closer than they are.

Don’t be fooled into thinking the fabled “East Rim” is anything but a marketing scheme. In fact, Grand Canyon National Park and Horseshoe Bend are separated by a 2-hour drive at least! Beware Grand Canyon tours to the east rim.

Here is one such marketing scheme:

Then Where is Horseshoe Bend?

Most of what this rumored “East Rim” encompasses is either the South Rim or Glen Canyon. Glen Canyon is full of slot canyons, red sandstone, and Horseshoe Bend, and is a separate National Recreation Area called the Glen Canyon NRA.

Getting From the Grand Canyon to Horseshoe Bend

Going to see Horseshoe Bend after visiting the Grand Canyon National Park is an excellent idea for any traveler. Although it isn’t part of the Canyon itself, it is within arms reach and should not be missed.

From Grand Canyon National Park, it takes around 1 hour and 45 minutes to reach Horseshoe Bend when taking the fastest route.  But beware! Some routes can take up to 4 and a half hours! Here are the routes; 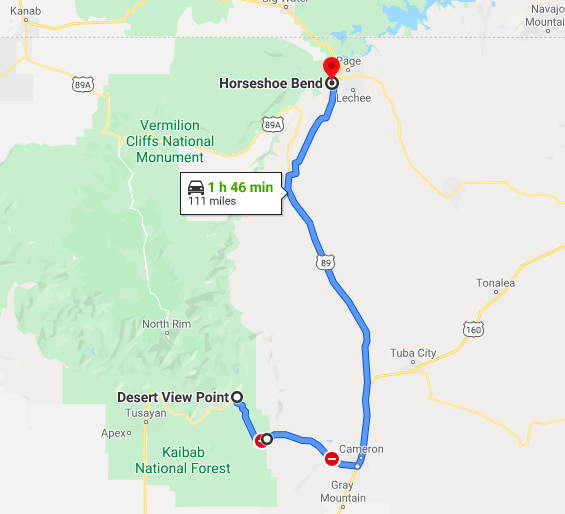 However, Desert View drive is narrow and windy and is closed occasionally in the winter for inclement weather and maintenance. Double-check road conditions in the winter before setting off. 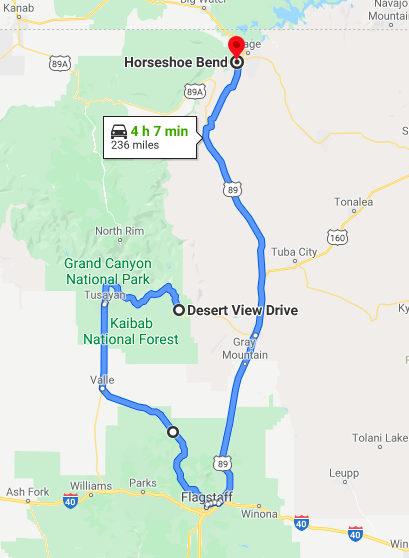 If Desert View Dr. is closed, drive nearly two hours (in the opposite direction of Horseshoe Bend) and pass through Flagstaff before heading North.

On a map, it may look like SR-180 (Ft. Valley Road) is the most direct route to Flagstaff, but zoom in a little, and you’ll realize how any abrupt turns and narrow passageways are on the road. This, combined with the relatively slow speed limit, will put you around 4 hours and 10 minutes of driving, the same as the safer route below. 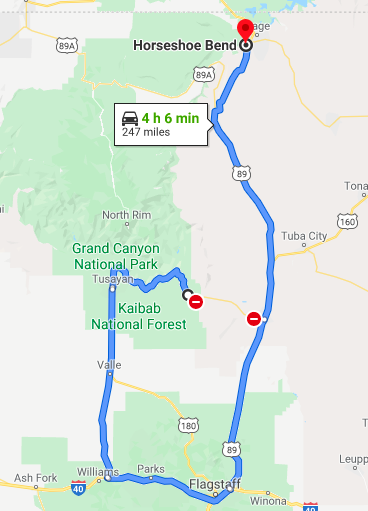 It may seem a shame to go back through Williams to meet up with 1-40 before heading back east to Flagstaff, but in reality, being on the fast I-40 will take you just as much time, and keep you safer than SR-180 above.

Even though this route is over 4 hours long, it takes you past Williams, Flagstaff, and Cameron. Three very different and exciting cities of Northern Arizona. Take the time to turn the drive into an adventure itself!

Originally from the city of Chicago, Adam spent 5 years in Beijing after graduating from West Virginia University with a major in Geology and a Minor in Chinese Studies. As an avid hiker and traveler, he is quickly falling in love with his new home: Las Vegas.
Read Our Data Based Study: The Best Hotels In Las Vegas

Things to Do in Grand Canyon South Rim